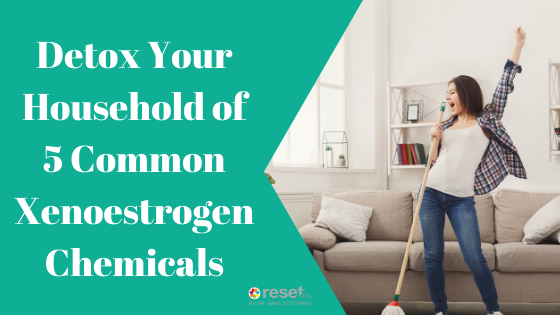 On your journey to hormone balance, it is important to also consider the products in your home. Many of which may seem harmless, but often contain xenoestrogens, which can produce negative effects on the body.

Xenoestrogens are clinically significant because they mimic the effects of endogenous estrogen and thus have been implicated in precocious puberty, PMS, endometriosis, and other disorders of the reproductive system [1] [2].

Xenoestrogens are a type of xenohormone that imitates estrogen and can wreak havoc with your natural hormone balance.

Endocrine disruptors have the ability to cause damage in 3 ways according to the NIEHS:

1. They mimic naturally-occurring hormones in the body like estrogens, androgens (like testosterone), and thyroid hormones, potentially producing over-stimulation.

2. They bind to a receptor within a cell and block the correct hormone from binding. The normal signal then fails to occur and the body does not respond properly.

3. They interfere with the way natural hormones or their receptors are made or controlled, for example, by altering their metabolism in the liver.

1. Atrazine is widely used as an herbicide to control broad-lead weed species that grow in crops such as corn, sugarcane, hay, and some variations of wheat. This herbicide is the second largest selling pesticide in the world and is estimated to be the most heavily used in the United States [3]. Due to its common use, it is important to choose organic varieties of fruits and vegetables or locally grown sources whenever possible and to also rinse fruits and vegetables well before consumption.

2. BPA is the monomer used to manufacture polycarbonate plastic and epoxy resins used as a lining in most food and beverage cans. The bonds in BPA-based polycarbonates care subject to leaching of BPA, which then contaminates the drinks and other products the chemical is used in. It is also important to note that some chemicals within BPA are also xenoestrogen disruptors and may cause disease in humans and animals [4].

3. Zeranol is currently used as an anabolic growth promoter for livestock in the United States and Canada [5]. It has been banned in the EU since 1985, but is still  present as a contaminant in food through meat production that is exposed to it [6].

4. Dioxin is a group of highly toxic chemicals that are released during combustion processes, pesticide manufacturing, and chlorine bleaching of wood pulp [7]. Dioxin is discharged into waterways from pulp and paper mills, but consumption of animal fats is thought to be the primary pathway for human exposure. Other things to avoid are bleached materials, especially in feminine hygiene products.

5. Parabens are a class of widely used preservatives in cosmetics, lotions, and other pharmaceutical products. This chemical is very hard to avoid as it is in many shampoos, conditioners, makeup products, and lotions. A quick look at the list of ingredients on the back of your care products may reveal that you can’t use them if you’re detoxing your body of xenoestrogens [8].

If you’re looking for the full list of items to avoid for a lifestyle overhaul, you’ll find it below. The more you research, the more you’ll realize that many of your favorite household products have been negatively affecting your natural hormone balance.