3 Simple Rules to Stop Soy From Disrupting Your Hormones 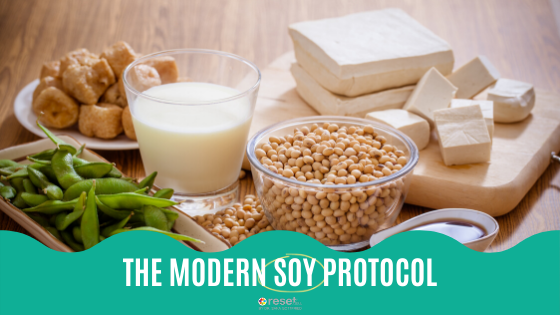 What's the deal with soy foods? Is soy good or bad for you?

Have you noticed that there are confusing perspectives on how soy should be treated? Some places tout it's health benefits, others shun it saying it's terrible for you, but what's the real deal?

If you've ever questioned eating soy or been confused about the real truth about soy, then this short article is for you.

But first, how did we even get here? Why did soy explode in popularity?

Soybeans have been grown in Asia for thousands of years. In the earliest periods of production, China is estimated to have produced over 70% of the world’s soybean crops. In 1904, the famous American chemist, G. W. Carver discovered that soybeans are a valuable source of protein and oil. He encouraged farmers to rotate their crops with soybeans and to the surprise of farmers, this produced a better primary crop.

Spurred by a need for oil, fats, and meal during wartime, America doubled its production of soy crops in the 1940s. This corresponds well with Dr. Morse’s travel to China where he researched soybeans and gathered more than 10,000 soybean varieties. A contributing factor of the rise of soybean production in American is due to the varieties Morse brought back with him.

In 2000, America produced roughly 75 million metric tons of soybeans which are either fed to animals or exported, though the consumption of soy in the US continues to rise.

Basically, soy has exploded in popularity because it's easy to produce and has a nutrient profile that makes it valuable for humans and animals to eat.

Small amounts of whole soy, preferably organic and fermented, have been shown to be a great choice when you go meatless.

Allow us to unravel the mysteries of soy and offer sane, evidence-based rules for consuming soy.

Here's what you need to know:

Genetically modified (GM) soy crops were widely introduced in 1996, and today up to 94 percent of soy available in American grocery stores has been genetically modified. Unfortunately, there is evidence that GM crops cause harm to your gut, microbiome, sex hormones (including aromatase, which is involved in estrogen synthesis), and insulin. For this reason, assume GM soy is guilty of harm to your body until proven innocent, and you are advised to avoid it by choosing organic whole soy or soy that is labeled “Non-GMO.”

In Asian countries, people eat moderate amounts of whole soy as part of a healthy diet. In the United States, Big Food pushes weird and highly processed foods under the guise that it’s healthy. Does “soy protein isolate” sound like a good idea? Instead of eating the whole-food version of soy, we try to isolate the “healthy” part, and it may be the reason behind the conflicting results, and by extension, the confusion about whether soy is good or bad for you. We recommend eating only whole soy—not the isolates, not the processed version, but fresh soy food, such as organic tofu and Edamame.

3. Eat fermented soy such as miso and tempeh.

Don’t let soy confuse you. Eat whole and non-GM soy, preferably fermented. If your thyroid is slow, limit yourself to two servings of whole soy per week.

There you have it, with these simple guidelines in place you pick soy options that support your health and hormone goals.

Speaking of hormones, how are yours? Have you taken the hormone quiz lately? If you need a quick check-in, shoot over to the hormone quiz and quickly get a read on the state of your hormones.