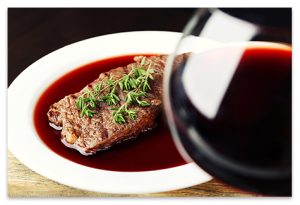 Who doesn’t love a grilled steak, washed down with red wine? Um, your microbiome, the aggregate microbes that live in your gut and play a major role in your risk of disease such as obesity, cancer, and diabetes. ((Turnbaugh, P., J. et al. "An obesity-associated gut microbiome with increased capacity for energy harvest." Nature 444, no. 7122 (2006): 1027-131.)) In fact, grilled meat may be the most harmful of all.((Berjia, F., L. et al. "Burden of diseases estimates associated to different red meat cooking practices." Food and Chemical Toxicology 66 (2014): 237-244.)) I’m often asked, especially by my friends in the Paleo community, why I recommend that people remove red meat for 21 days in my book, The Hormone Reset Diet. Here are 15 reasons, along with the scientific evidence. Most link a diet high in red meat with altered microbiome, and as a result, wayward molecular relationships inside your own cells. To be fair, grass-fed meat contains a better ratio of omega-6 to omega-3 fats, but data are lacking to show that grass-fed meat is better for your estrogen levels, risk of cancer, and weight gain. In the absence of robust data, I recommend taking a periodic break from red meat and see how your body responds.
For more information about the Hormone Reset Detox, click here.