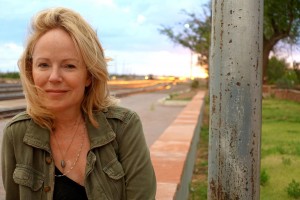 I fell in love with Dani’s work when I read Devotion, a powerful memoir about being a mom, writer, and spiritual seeker. Dani was kind enough to let me interview her recently with my top 5 burning questions.

In my obsessive consumption of every book she has written and every interview she has given, I feel like her offering is best summed up in a quote she shared from the poet Jane Kenyon:

That's why babies howl at birth, and why the dying so often reach for something only they can apprehend.

At the end they don't want their hands to be under the covers, and if you should put your hand on theirs in a tentative gesture of solidarity, they'll pull the hand free; and you must honor that desire, and let them pull it free.

Dani Shapiro offers that hand to us, in a “tentative gesture of solidarity,” and says “me too.” It’s incredibly tender and precious, and I hope you are touched by her hand as I have been, because the world is a better place when that tender place inside gets touched in this way. 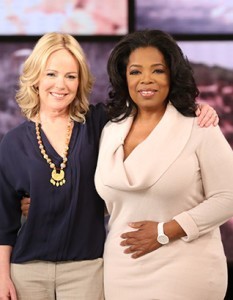 Dani Shapiro’s Official Bio: She’s a celebrated, bestselling author of the memoirs Devotion and Slow Motion, and five novels including Black & White and Family History. Her work has appeared in The New Yorker, Granta, The New York Times Book Review, the op-ed pages of The New York Times, The Los Angeles Times, and has been broadcast on “This American Life”.  Dani was recently Oprah Winfrey’s guest on “Super Soul Sunday,” and was chosen by Arianna Huffington to speak at the New York City “Thrive” conference. She has taught in the writing programs at Columbia, NYU, The New School and Wesleyan University; she is co-founder of the Sirenland Writers Conference in Positano, Italy. A contributing editor at Condé Nast Traveler, Dani lives with her family in Litchfield County, Connecticut. Her latest book is: Still Writing: The Perils and Pleasures of a Creative Life.

Dr. Sara: Among your books, which is your favorite? Most vulnerable? Easiest to write? Why?

Dani Shapiro: Oh gosh, choosing a favorite among my books is a bit like asking a mother to choose among her children!  I suppose I would have to pick my memoir Devotion as my favorite, because the experience of writing it – and bringing it into the world – was so profound.  I change through the writing of all my books, but that book really changed me.  The response when it was published renewed and underscored my understanding that all of us human beings are full of longing and doubt and fear, and that giving voice to that made me feel profoundly less alone in the world.  As for most vulnerable, probably Slow Motion, because I was writing about such a raw and painful time in my life.  None of my books are easy to write, but Still Writing flowed out of me with greater ease than usual, because it was the result of many years of teaching and thinking about the craft and process of writing.

Dr. Sara: One of the scenes that stayed with me most is your visit with the osteopathic physician in Devotion about the “chain ganglia,” and the sense that one may inherit or develop the heightened sense of being under threat. (I sometimes lovingly call a similar situation my “hot amygdala.”) I feel like this is the root cause of cortisol imbalance in women, which may lead to anxiety, depression, low sex drive, overeating, insomnia, among other issues. Would you say more about how you’ve learned to adapt to this discovery? I suspect it may be a necessary part of being a great writer, i.e., it’s not a “problem” to be medicated away – do you agree?

Dani Shapiro: Oh, so interesting!  That heightened sensitivity is, I think, very much part of being a writer, or any kind of artist, or really, any kind of fully alive person.  I suppose I have adapted by understanding that this heightened state is part of me – it holds many gifts – and I need to respect it, and respect my own rhythms in terms of taking care of myself, treating my “instrument” with respect.

Dr. Sara: I have a fantasy of escaping my urban life for a less stressful, more pastoral, quieter existence. Is that what you’ve found in Connecticut? What has been the impact of your move from New York to Connecticut, if any, on your nervous system, psyche, wifehood, motherhood, writing?

Dani Shapiro: I think that, to paraphrase the words of Jon Kabat-Zinn, wherever we go, there we are. I do think living in the country has been good for me – my days are less full of external stress – but in the absence of external stress I’m certainly capable of manufacturing the internal kind.  I also travel a great deal for teaching and public speaking, so the country feels more like a home base for me than a constant way of life.  It has been tremendously wonderful to raise my son in the country – in a small town where he has grown up with a sense of belonging and security.  I think he’s ready to fly the coop now, though!

Dr. Sara: How has motherhood changed your writing? As the mom of two daughters, ages 15 and 10, I’m really curious about the lighter and heavier repercussions and gifts for you.

Dani Shapiro: Up until my son’s birth, much of my work came from a place of being a daughter.  I wrote a great deal about my parents, and about myself in relation to the world as a young person.  My son’s birth was a tremendous dividing line, in this way.  Whole new vistas opened to me in terms of what interests me about family, about being a wife, a mother, about time, the passage of time, the future, the world he and his generation will inherit.  So in that sense, it has been enormously expanding.  Of course, motherhood is also a full-time job, and so for the past sixteen years I’ve been working full-time at two jobs (more than two jobs, if you factor in my teaching life.)  The playwright Sarah Ruhl wrote something wonderful in a recent essay about motherhood and writing: “I found that life intruding on writing was, in fact, life.  And that, tempting as it may be for a writer who is also a parent, one must not think of life as an intrusion.  At the end of the day, writing has very little to do with writing, and much to do with life. And life, by definition, is not an intrusion.”  I love that.  And lastly, there has been the question, thrumming along side me ever since his birth, about protecting him, protecting his privacy.  In fact, it inspired an entire novel — my novel Black & White is very much about an artist mother who doesn’t know how to draw the line.  I took an obsession of mine and let my imagination run with it.

Dr. Sara: My husband has a tendency for what he calls “waiting for the other shoe to drop.” My next book is about DNA and epigenetics (the non-DNA ways that you change how your DNA is expressed, mostly with lifestyle choices), and I’ve learned that my husband inherited the gene that makes him have a “worrier strategy.” You refer to a similar predisposition in your books. What has helped you over the years to adapt and work with this tendency? I imagine your writing, yoga, metta meditation – but can you tell us more about any substantive shifts that have occurred for you in relation to this tendency over time?

Dani Shapiro: I definitely have the “worrier strategy” gene, which I inherited from a long line of Jewish worriers.  I have constructed my entire life, as much as I possibly can, to combat this tendency, which – as the Buddhists would say – is not skillful.  It does no good to worry.  Metta has been a big part of the shift I have made – knowing that here is a practice I believe in, a simple practice, an irrefutable one (who can argue with wishing oneself and others well?)  Yoga has also been part of my life since my 20’s.  To be completely honest, I’m also willing to take a pill when I need to.  For instance, for years I was terrified to fly.  Flying is a part of my life.  I can’t really do what I do without getting on planes.  When I became willing to take a small amount of a sedative before the flight, what I began to learn is that it was the fear I was most afraid of — the panic I was most afraid of — and after a while, I found that I rarely needed to take the sedative, because I had created a new way of being for myself – one in which I didn’t need to panic.  I’ve never talked about this in an interview before, but I think it’s important for readers to know and understand that there are many paths to wellness, and not judge one as better than another. 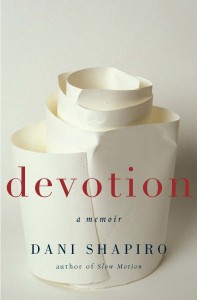 “I was on the verge of tears more than once in the course of Dani Shapiro’s impeccably structured spiritual odyessy. But Devotion’s biggest triumph is its voice: funny and unpretentious, concrete and earthy–appealing to skeptics and believers alike. This is a gripping, beautiful story.” – Jennifer Egan

So, Dear Ones, I hope you can see why I’m smitten with Dani Shapiro. She feels like an older sister who has found her way as a sensitive soul in a complex, messy world. Please buy her book, Devotion, and settle your chain ganglia.